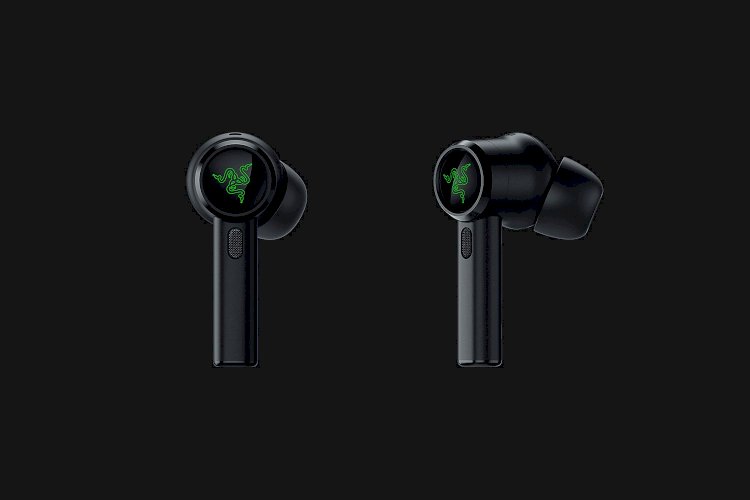 Razer’s Hammerhead True Wireless Pro earbuds are a major improvement over the company’s first pair of true wireless earbuds. They’ve switched from an open-air design to a sealed fit; have better sound, thanks to that decision (and a partnership with THX); and they offer adequate active noise cancellation. Razer has thrown in a generous heap of ear tips (including Comply foam), and there’s also a low-latency gaming mode to keep the earbuds in sync with your mobile gaming.

But the main stumbling block with Razer’s new earbuds is price. At $200, the Hammerhead True Wireless Pros face a tough mix of competition — and we’ve reached a point where many of those alternatives have moved beyond the core basics of fit, sound quality, and ANC to offer more unique features. In Apple’s case, that’s Spatial Audio. For Samsung, it’s the clever new speech detection feature that enables ambient sound as soon as you start talking. Jabra’s earbuds can pair with two devices at once. Razer doesn’t really have anything to match these perks (unless you’re really enthused about that gaming mode), and the result is earbuds that are perfectly satisfactory but fail to stand out. 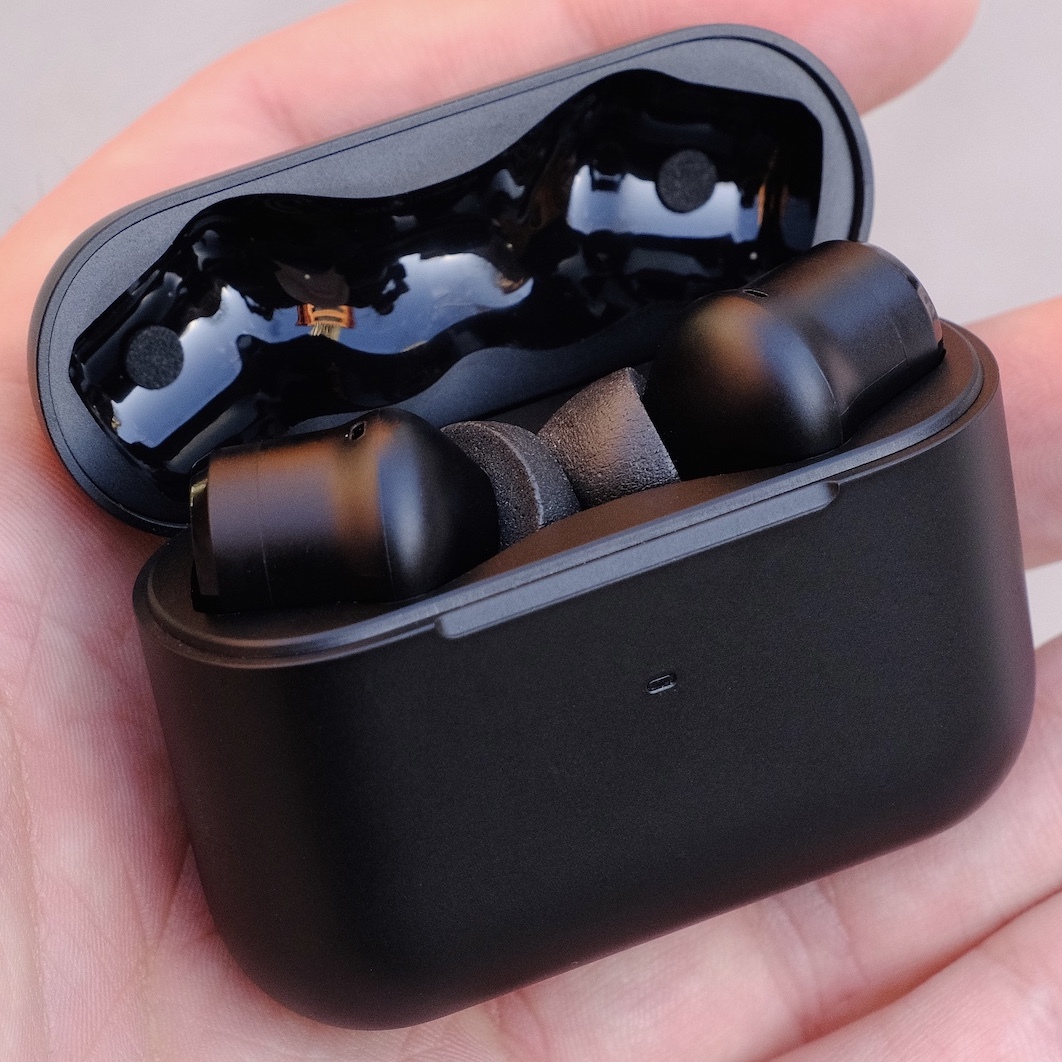 From a design standpoint, the Hammerhead True Wireless Pros are your typical stem-style earbuds. They’re a good deal larger than the AirPods Pro and less curvy, but the matte black finish ups the sleek factor. No, the Razer logo on the outside doesn’t light up. That’s the area where you’ll tap (or hold) to access the various gesture controls, which proved responsive in my tests, can be customized to your liking, and cover all functionality except for volume. Below this on each stem is a mic used for active noise cancellation; the mics that work for calls are positioned at the bottom of the stems for optimal voice pickup.

Razer packages seven sets of ear tips in the box: there’s standard silicone (S, M, L) and a grippier version (S, M, L) that’s meant for active use cases like running. You’ll also find a medium set of Comply foam tips that, in my case, made for a terrific seal. I ended up keeping those on all the time. Razer definitely gets props for doing everything it can to help customers find the right fit, when many other earbud makers continue to phone it in with just three sets of tips. The Hammerhead True Wireless Pros are IPX4-rated for sweat resistance, making them suitable for general workouts.

Razer has packed 10mm drivers into these earbuds, and they’ve gone through THX certification to “present a rich, balanced sound stage for all your movies, music, and gaming.” I can’t speak to the rigors of THX’s process, but the Hammerhead True Wireless Pros do sound articulate, well-balanced, and have some extra bass to spare if you want to dial up that part of the audio.

Speaking of which, Razer’s mobile app lets you fully customize the EQ to your preference or choose from presets. The default “THX” mode is where I stayed, but it’s nice that you’ve got full control over the whole EQ range. The Hammerhead True Wireless Pros can deftly hop between genres without ever meeting something they can’t handle. Codec support covers the standard AAC and SBC, with no Apt-X on the Android side. Like many other earbuds, these will automatically pause music if you remove one from your ear and resume when it’s put back in.

Unfortunately, the active noise cancellation doesn’t live up to that impressive sound quality. The Hammerhead True Wireless Pros approach ANC in the same way as other premium earbuds, producing anti-noise to counter the ambient sounds around you. But Razer’s ANC is very average: it’s efficient at hushing the constant, low-level hums and whirring you get in many rooms or office spaces, but it doesn’t live up to other earbuds at this price level. The Jabra Elite 85t and Samsung’s Galaxy Buds Pro best Razer here, and they’re soundly defeated by more expensive options like the Bose QuietComfort Earbuds and AirPods Pro.

If anything, it feels like the passive isolation I get, thanks to the Comply tips, does the most work at blocking outside noise. Razer’s transparency / ambient mode also sounds digitized compared to the best of what’s out there, and the voice microphones are passable but nothing to write home about.

So then we’re left with that special gaming mode feature, which Razer says reduces Bluetooth latency to 60 milliseconds. That should help keep up with the action in fast-moving mobile game titles, and it seemed to do the trick just fine in my experience. But the company also notes that gaming mode will drain the battery faster, and that’s an area where these earbuds already struggle. The Hammerhead True Wireless Pros advertise up to four hours of continuous listening, which is definitely on the low end and below competitors like Jabra (5.5 hours), Samsung (five hours), and Sony (six hours). The well-built carrying case has enough juice for you to reach 20 hours of total playback, but it lacks wireless charging.

Every smart device now requires you to agree to a series of terms and conditions before you can use it — contracts that no one actually reads. It’s impossible for us to read and analyze every single one of these agreements. But we started counting exactly how many times you have to hit “agree” to use devices when we review them since these are agreements most people don’t read and definitely can’t negotiate.

Like all Bluetooth earbuds, the Razer Hammerhead True Wireless Pros can be used without agreeing to anything in software. But the app plays a key role in customizing the controls, EQ settings, and more.

Gaming mode might be a boon if you spend hours playing PUBG Mobile or Call of Duty Mobile, but I didn’t find any obvious sync issues with more casual games when the earbuds were on their normal setting.

Razer’s Hammerhead True Wireless Pros would be among my top recommendations at $150 or below. They sound quite good across all sorts of music, Razer goes above and beyond with ear tips, and I didn’t mention other bonuses like a two-year warranty. They’re a big improvement over the original Hammerhead True Wireless buds. But they’re outshined in the $200 category that they live in right now. Middle-of-the-road ANC and battery life on the short side drag them down to a point where it’s hard to reconcile performance and cost. A price cut would put Razer’s second-generation true wireless earbuds in a much better place and help them shine for the qualities they do deliver.

South Africa is running rapidly out of road

Covid: WHO backs Oxford vaccine 'even if variants present'

Vodacom vs MTN vs Telkom vs Cell C – The battle for mobile...

Even with vaccines, Covid will always be with us

LOADSHEDDING TO BE IMPLEMENTED FROM NOON TODAY